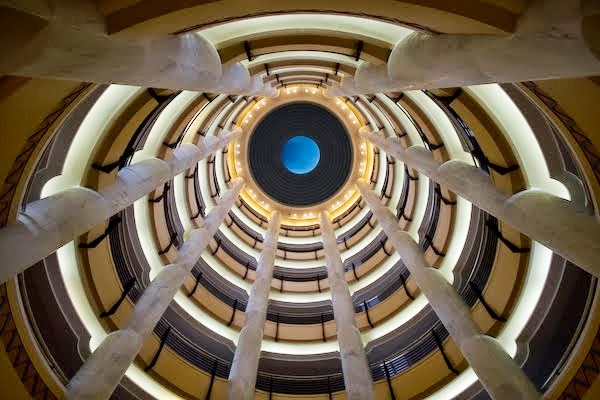 
An exclusive report from Fukui
by Ryusaku Tanaka "How can you allow the restart of such a dangerous nuclear power plant?" said a woman holding her child while glaring fiercely at the riot police officer at the entrance of the Oi nuclear power plant. (Photo: Ryusaku Tanaka)
Nuclear reactor No.3  of Oi nucelar power plant operated by Kansai Electric Power Co. in Fukui prefecture is set to be restarted tomorrow, meaning that the fuel rods will be removed to initiate nuclear fission.

On Saturday, the day before the restart, a crowd of protestors determined to stop the restart repeatedly clashed with the riot squad of local Fukui Prefecture Police Force.

Fifty of the protesters guarded both sides of the iron fence built by the electric company, attempting to block the power plant emloyees from entering the premise. They chained themselves to the iron fence, using their body as shields to prevent penetration. Several cars (4-5) were also chained up.

They are determined to completely block off the entrance to the power plant.

The riot squad arrived in less than half an hour.


"You are in violation of the road traffic act. Leave immediately."

They warned repeatedly using the loudspeakers. The protesters chained themselves to the iron fence. (Photo: Ryusaku Tanaka)

While rain continued to pour on them, the confrontation between the protestors and the police that started at 4 o'clock in the afternoon went on for hours evern after getting dark. The rain slowly eat away their body temperature.

A woman holding a young child said drawing close to a police officer.


"Why don't you get it that you are taking away our children's future?"

All he could say, however with a sense of reluctance, was this.


"It's against the law to occupy a public road."


Of course. Even a police officer is born from its mother.
The officer could have his own child back in his office.

The Oi power plant's restart could mark the first of a series of nationwide restarts.

Protesters and the police that must clash in constant high alert--if you see it from a different perspective, they could both be regarded as victims of the current Noda regime.